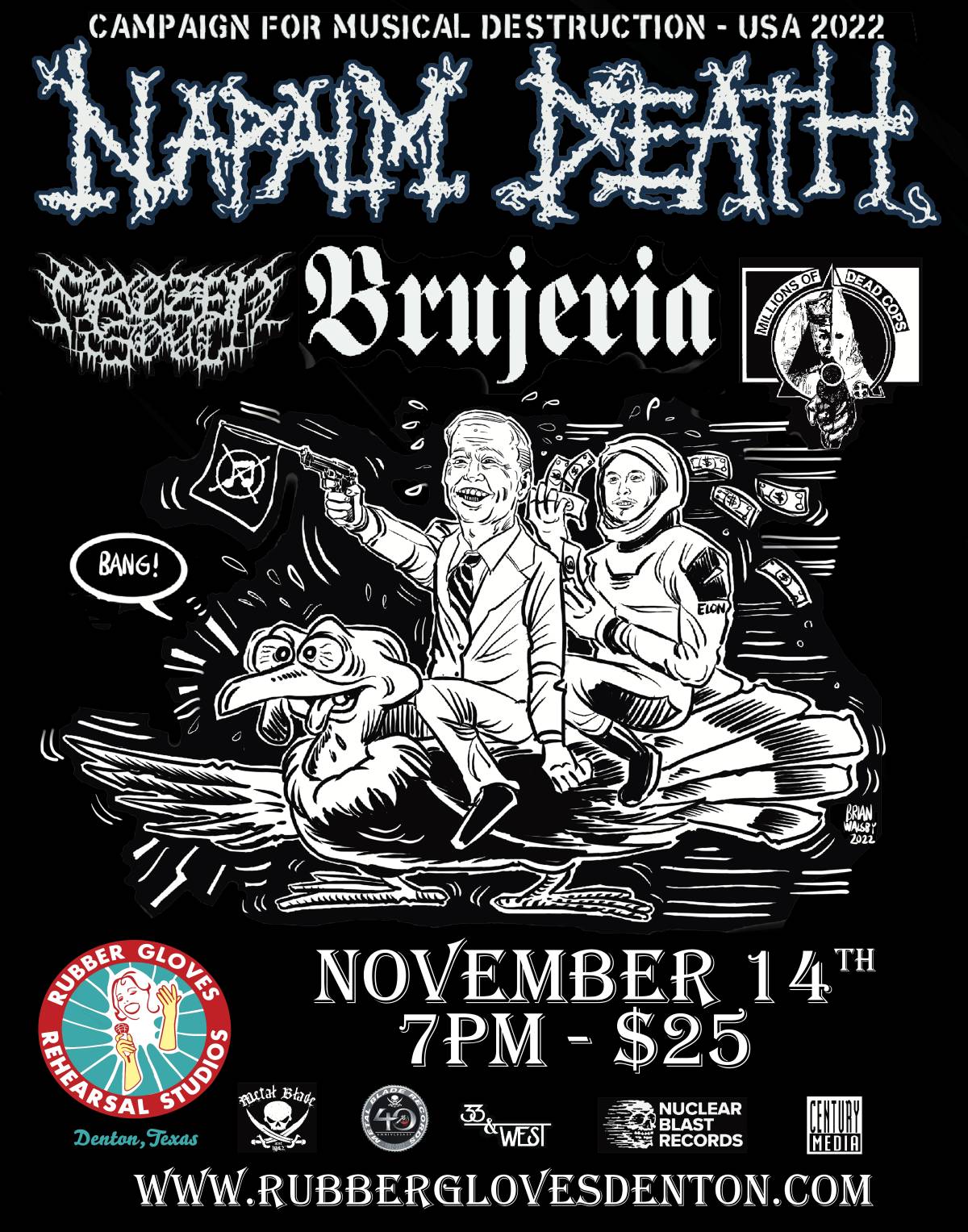 All Ages. Under 17 must be accompanied by a guardian.

The fathers of grindcore, Napalm Death pushed the envelope of metal to new extremes of ear-splitting intensity, rejecting all notions of subtlety to forge a brand of sonic assault almost frightening in its merciless brutality. Formed in 1981, they trafficked in the usual heavy metal fare for the first few years of their existence, but by the mid-’80s they began to expand their horizons, incorporating elements of hardcore and thrash into the mix, culminating in the release of 1992’s acclaimed Utopia Banished. More influences crept in as the years progressed, with career-defining efforts like Utilitarian (2012), Apex Predator: Easy Meat (2018), and Throes of Joy in the Jaws of Defeatism (2020), embracing crust-punk, noise-rock, and industrial and death metal, adding nuance to the group’s eye-opening sociopolitical lyrical commentary.

One one level, Brujeria are a brutally powerful rock band whose music walks along the border of grindcore and death metal. On another, Brujeria are a street-level exercise in performance art. To take them at their word, the members of Brujeria are leaders of a Mexican cartel of drug smugglers, ruthless men who use mutilation and murder to protect their interests. The members of Brujeria perform in disguise, and their music is a reflection of their sociopathic embrace of violence, drugs, and satanism. However, it’s an open secret that Brujeria aren’t really members of a drug cartel any more than GWAR are alien warriors who crash-landed in Antarctica. The band began as the side project of several noted metal and punk musicians, and while their contribution to the group is well known, officially Brujeria still insist they’re from Tijuana, Mexico, using their collective persona for dramatic effect as well as dark satire.

Frozen Soul is an aptly named Texas extreme metal unit with a style that evokes the icy and unrelenting sonic assault of pioneering death metal acts like Bolt Thrower, Mortician, and Obituary. The band inked a deal with Century Media in 2020 and issued their debut long-player, Crypt of Ice, the following year.

Founded in Fort Worth in 2018 and comprised of Chad Green (vocals), Michael Munday (guitar), Samantha Mobley (bass), Matt Dennard (drums) and Chris Bonner (guitar), Frozen Soul debuted in 2019 with the EP Encased in Ice. Featuring four tracks, including a cover of Mortician‘s “Witch Coven,” the EP caught the attention of Century Media, which quickly added the ascending old-school death metallers to their roster. With former guitarist Daniel Schmuck handling production and engineering duties, the band headed to the studio to record their full-length debut. The resulting Crypt of Ice was released in 2021.

MDC is an American punk rock band formed in 1979 in Austin, Texas, subsequently based in San Francisco, and currently Portland, Oregon. Among the first wave of bands to define the sound and style of American hardcore punk, MDC originally formed as The Stains; they have periodically changed the meaning of “MDC”, the most frequent being Millions of Dead Cops. The band’s lyrical content expresses radical left political views and has proven influential within the punk subculture.