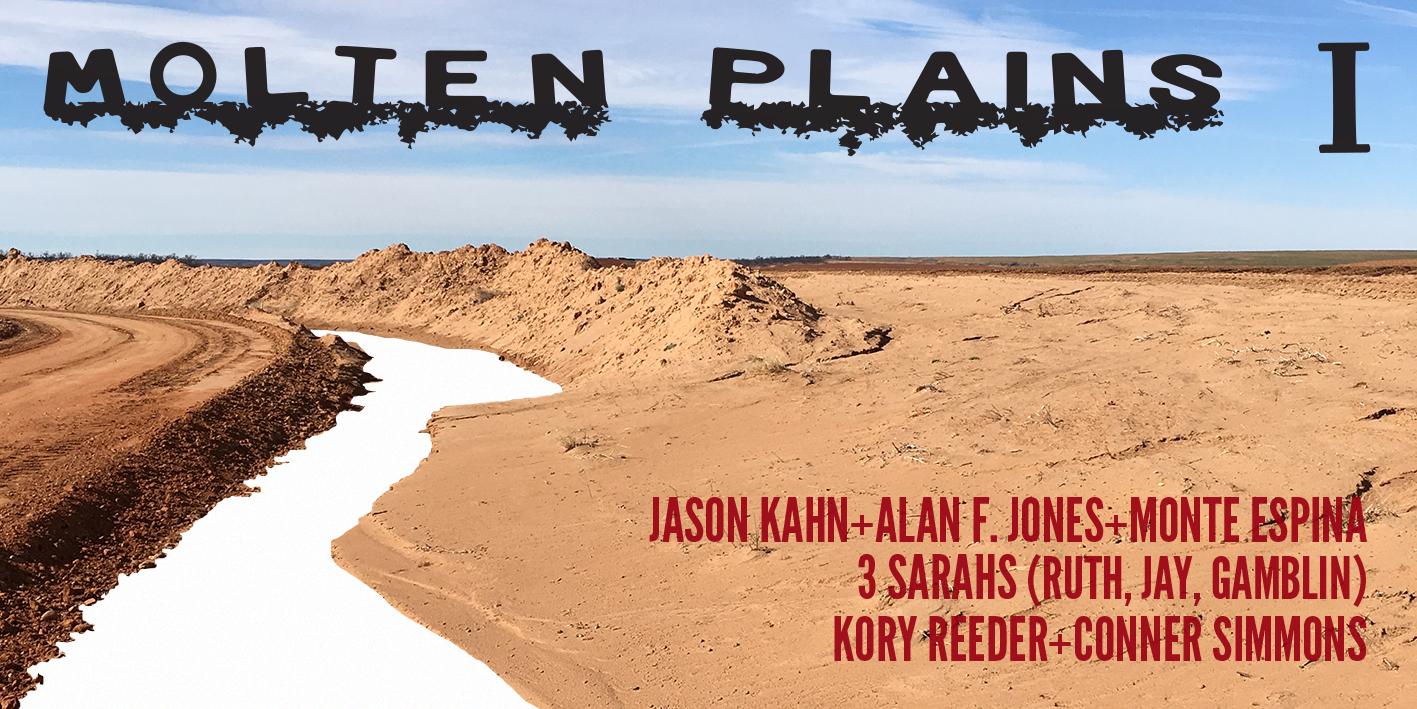 Spread the ❤️
Welcome to the first Molten Plains, a monthly series of adventurous sounds and further music experiences.
For this very special occasion we’ll have one quartet, one trio, and a duo:
Jason Kahn will be on tour from Switzerland, Alan F. Jones is coming down from Washington, Monte Espina will join them as a first time quartet. How come Sarah Ruth, Sarah Jay, and Sarah Gamblin have never performed before as 3 Sarahs? Kory Reeder and Conner Simmons will start the night with their double double-bass and electronics duo.
doors 8:00pm
music 8:30pm sharp
Tickets: $5-15 sliding scale.
JASON KAHN + ALAN F. JONES + MONTE ESPINA
Jason Kahn was born in New York, in 1960. An artist, musician, and writer. He lives and works in Zürich. His work with electronics involves chaotic feedback systems and placing his body in the circuit ow. Grabbing open leads with the hands makes and breaks circuits, causing the synthesizer to overload or momentarily collapse. Various contact microphones, electromagnetic inductors, and the synthesizer’s own output via a mixing board are used to modulate the parameters of the synthesizer. This results in a very dynamic system, often di cult to control, but allowing great expressivity—much like any acoustic instrument, but electronic.
As an electronic musician, guitarist, vocalist, and percussionist, Kahn collaborates with many international musicians in the context of free improvised music. Jason has performed and exhibited work around the world.
http://jasonkahn.net/index.html
Alan F. Jones is a Dallas-born, Washington-based musician, composer, and sound designer. His live sets are fully improvised, emphasizing the use of guitar, lap steel, and pedal steel. Alan has performed and recorded with his groups Telescoping, MANKINDA, what, and Steerage, and with many musicians like Derek Rogers, Anla Courtis, Cristián Alvear, Judith Hamann, Greg Kelley, Meridian, Sandy Ewen, Rob Millis, Christian Weber, Jacob Wick, Reed Evan Rosenberg, Gabi Losoncy, Ethan Tripp, Mathieu Ruhlmann, Joda Clément, Leah Bowden, Bruno Duplant, among others. He runs the Laminal mastering studio and curates the Marginal Frequency performance series and record label of the same name.
https://www.af-jones.com/
Monte Espina is the free improvisation duo of Miguel Espinel and Ernesto Montiel, two Venezuelans who have been living in Texas for twelve and six years respectively. They met in 2016, and a few months later they started working together.
https://monteespina.bandcamp.com/music
3 SARAHS
Sarah Ruth is a diverse musician and artist – a multi-instrumentalist, she employs hammered dulcimer, harmonium, electroacoustic sound art, and extended vocal techniques. She performs frequently both solo and with multiple bands and improvisational ensembles in the North Texas area. She is a University of North Texas graduate where she focused on vocal studies and electroacoustic composition. She has also studied with Meredith Monk and members of her vocal ensemble.
https://www.sarahruthalexander.com
Sarah Gamblin is a professional dancer who specializes in dance improvisation and concert dance and has performed all over the world. She is the coordinator of the Texas Dance Improvisation Festival and has been a professor at TWU Dance since 2002.
Sarah Jay is a Denton, Texas-based experimental musician and improviser. Drawing inspiration from early techno, ambient, and noise, she employs synthesis, vocals, and electroacoustic elements in her various projects.
KORY REEDER + CONNER SIMMONS
Kory Reeder is an American composer and performer whose music investigates ideas of objectivity, place, and immediacy. His music has been performed in concerts and festivals across the Americas, Asia, Australia, and Europe and he has frequently collaborated with opera, theater, and dance, as well as noise, and free-improv; and has been released on Edition Wandelweiser, Petrichor Records, Sawyer Editions, Impulsive Habitat, and Another Timbre (upcoming). Kory is from Nebraska and currently resides in Texas where he is an active performer and is currently finishing a PhD. at the University of North Texas.
www.koryreeder.com
Conner Simmons is a composer, songwriter, double bassist, and media artist currently living in Denton, Texas. Conner has worked in various musical settings, including experimental performance art, composition for film/ television, orchestral performances alongside the San Antonio Symphony, and a collaborative installation in Bologna, Italy. As visual artist, their early interests in photography and documentation of life as an artistic practice has had a significant impact on their current practice.
www.connersimmons.com