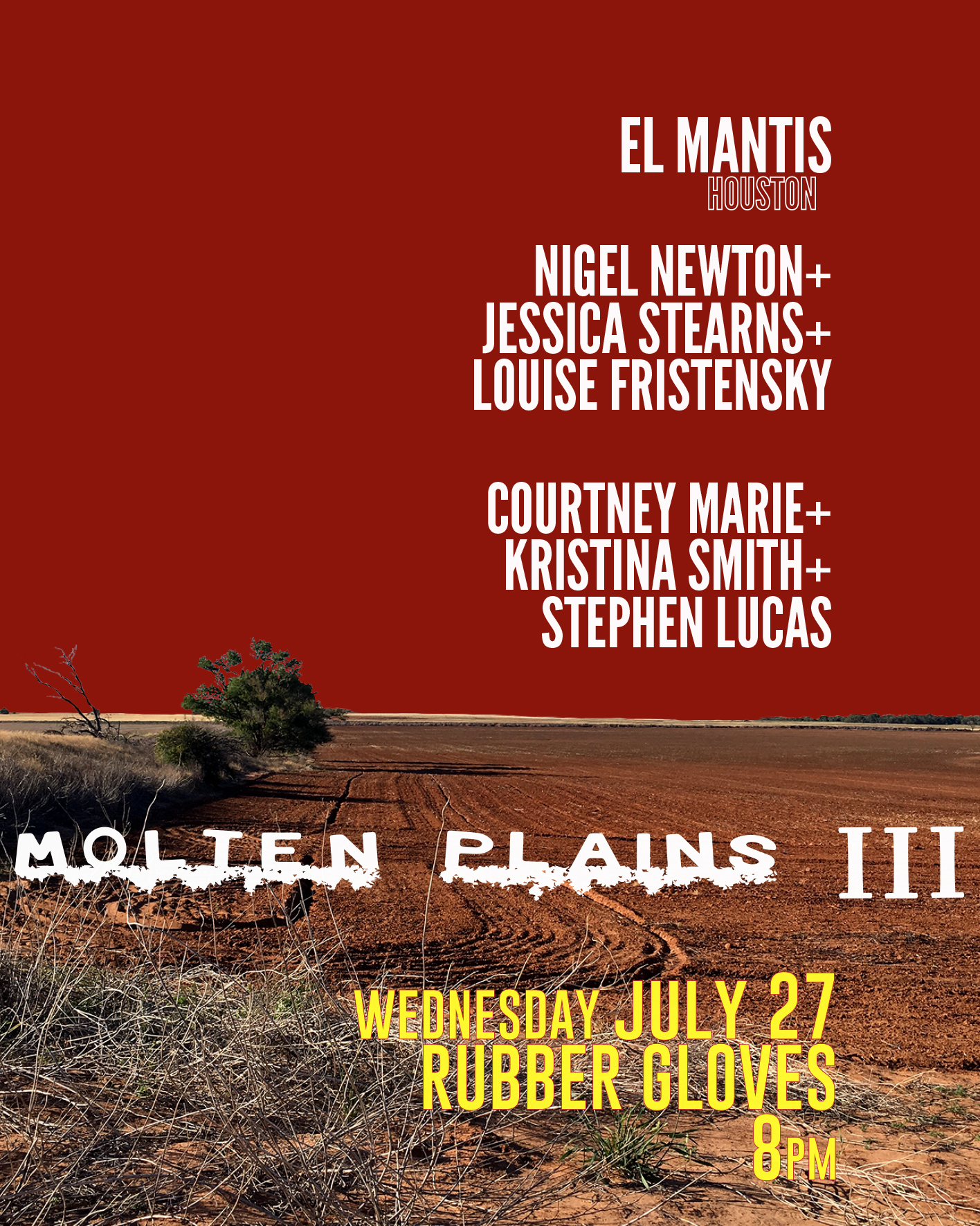 Spread the ❤️
Three trios for the third Molten Plains!
El Mantis are bringing their heavy psychedelic jazz from Houston, multi-instrumentalist Louise Fristensky along with Jessica Stearns on saxophone and Nigel Newton on marimba will play together for the first time; a poetry_spoken-word_upright piano trio of Courtney Marie, Kristina Smith and Stephen Lucas will set the night off.
doors 8pm
music 8:30 sharp
$5-20 generous sliding scale
Molten Plains is a monthly series of adventurous sounds and further music experiences.
EL MANTIS (Houston)
A heavy psychedelic jazz trio formed in early 2021 by Houston area musicians Danny Kamins (Etched In The Eye, CARL) Andrew Martinez (Ak’Chamel) and Angel Garcia (Laktating Yak). The debut self-titled album will be released in the summer of 2022.
LOUISE FRISTENSKY + JESSICA STEARNS + NIGEL NEWTON
Among other things, composer, sound sculptor, and systems artist Louise Fristensky creates works focused along the micro-refractions of reality’s pointillistic network of personally-aggregated and mutually agreed-upon mythologies; the places where the air tastes of electricity. Current and recent projects include to swim in air: an in-progress modular extractable system of intermedial works connected by a sub/conscious structure of perceptual exploration, and False Landscapes: an evening length experimental video and audio work traveling the beautiful unreality of internal spaces, their intricacies and world-growths, and the self-sustained logic which maintains their construction.
Jessica Stearns is a saxophonist and improvisor based in DFW. She performs with Sonoren, a free improvisation trio, and their album Charm the Winds is forthcoming.
Nigel Newton is a multi-instrumentalist, songwriter, producer, okra rancher, and composer. Having won several composition awards in his teens, he continued learning at the prestigious Berklee College of Music, where he cultivated a unique style of playing the vibraphone and studied songwriting, jazz composition, and the High Art of Translucence. He has since relocated to the DFW metroplex where he spends his time performing and gazing at stars.
COURTNEY MARIE + KRISTINA SMITH + STEPHEN LUCAS
Courtney Marie is a writer and artist based in Denton, Texas. She enjoys working with text as an art medium and performance object and sometimes she plays music with her friends. Lives with two cats, loves to travel, and writes a lot of letters.
Kristina Smith is an image and object based visual artist and educator based in Denton TX. She received an MFA with distinction in Studio Art from Texas Women’s University in Denton, TX, where she focused on photography, book arts, ceramics, and sculpture. She currently works at the University of North Texas. Her creative research explores memory, familial identity and cultural erasure, with her most recent work examining late stage capitalism, mental illness, and the exploitation of the working class.
Stephen Lucas is a musician, intermedia artist, and programmer based in Denton, TX. As a keyboardist, he specializes in contemporary music with both piano and electronics performance. His primary solo project, Stephen Lucas: Live at Brussels explores technical synth playing and Dogmus arrangement — he also performs in the prog/zeuhl band Vaults of Zin and the Sounds Modern concert series, among other projects in North Texas. His multimedia compositions are known for combining starkly cartoonish and abstract elements with computer generated audio and video via custom-created software. His other major interests include cybernetics, metaphysics, and baking.