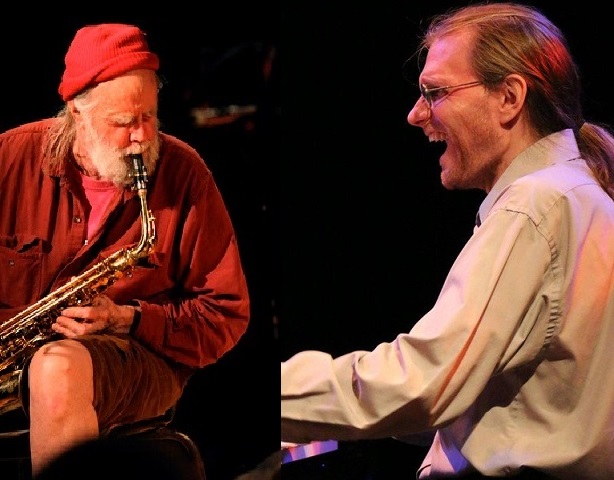 When these two met in 2006 at the Goobye Blue Monday bar in Brooklyn, Jack was performing in one of the 15 min. sets for which the venue was famous. They soon played a session, and another, and another. They both have the capacity to shift from near-classical to near-jazz to nearly insane, bringing in bits of melody from virtually anywhere, along with kicking and screaming. They have performed often, did their first full tour as duo in Jan. 2020, just missing covid.

They ventured into the South heartland for a barn-storming two weeks–Roanoke, Columbia SC, Savannah, Jacksonville, Orlando, St. Pete, Tallahassee, Birmingham, Chattanooga, Knoxville TN, Greensboro NC, Richmond, and DC. Of all the wide-ranging music groups in which Ron Stabinsky has participated, probably best known are the notorious band Mostly Other People Do The Killing (now a trio with Moppa Elliott and Kevin Shea). In 2018 and had joind the reunited rock band Meat Puppets . He has the distinction of performing as a classical pianist, a straight-ahead jazz musician, occasionally a rock musician, and regularly as an accomplished free improviser.

He was born a musician, having received his first musical lessons at the age of five from his grandfather, played concerts as a prodigy, and became a professional musician at an early age. His mentors in the art of free improvisation have included Bill Dixon, Joel Futterman, and Jack Wright. In the past few years “keyboard” includes the Nord Lead 4 Synthesizer, and free improvisation extends his range to trumpet, various objects inside the piano, including dental floss and a load of objects that seem to serve no purpose..

In 2016 Ron finally released his first solo album, Free for One, the culmination of more than a decade of evolving his improvised solo language. It received four stars in DownBeat and tied for number one debut of the year in the 2016 NPR Music Jazz Critics Poll. In addition to solo piano improvisation, he enjoys working on music in stylistically diverse situations throughout the United States and Europe with a variety of other musicians and ensembles. These include free-improvising saxophonist Jack Wright, lead trumpet legend Dave Stahl, bass trombone virtuoso David Taylor, Arizona desert rockers the Meat Puppets, and NEA Jazz Master David Liebman. Recent festival appearances include Newport Jazz Festival, North Sea Jazz Festival (Netherlands), Moers Festival (Germany), Jazzfestival Saalfelden (Austria), Outreach Festival (Austria), and Jazz and More Festival Sibiu (Romania). He is currently a regular member of the band Mostly Other People Do the Killing, the new music ensemble Relâche, the Charles Evans Quartet, and the Peter Evans Ensemble, a new expanded conception of the critically acclaimed Peter Evans Quintet. video of Ron solo with Mostly Other People and with Meat Puppets His recording of improvised music with Jack Wright and other musicians is here: Slush Fun and Ron Stabinsky-Ben Wright-Jack Wright

In 1972, Jack Wright left his academic position at Temple University in Philadelphia (European History) and soon began directing his energies into music. Now at 77 he is one of a small number of musicians in North America who have played free-form improvised music exclusively for four decades. He has deliberately eschewed the conventions of musical careerism to pursue his own vision. Although his de-professionalized approach sets him apart from most musicians at his level of accomplishment, his art has always grown and opened new paths for the saxophone. He is an original and virtuosic saxophonist, a recognized improviser who is deeply lyrical, despite his wide distance from the mainstream. The esteemed Washington Post has said ” “In the rarefied, underground world of experimental free improvisation, saxophonist Jack Wright is king.”

Through years of near constant touring, often performing in Europe and North America (and in Japan in 2006), Wright has performed with a huge range of players, and brought European musicians to the U.S. to perform together and meet American players. His vast list of collaborators includes some well-known to the media, but more significant are the many obscure greats he has partnered with. He has made over 60 recordings (many published on his own Spring Garden label), performed in over 25 countries, and written extensively and insightfully about music and society for journals such as Improjazz (France) and Signal to Noise (US), as well as his own website, Spring Garden Music. He has published a book, The Free Musics, which has been widely read and commented upon.