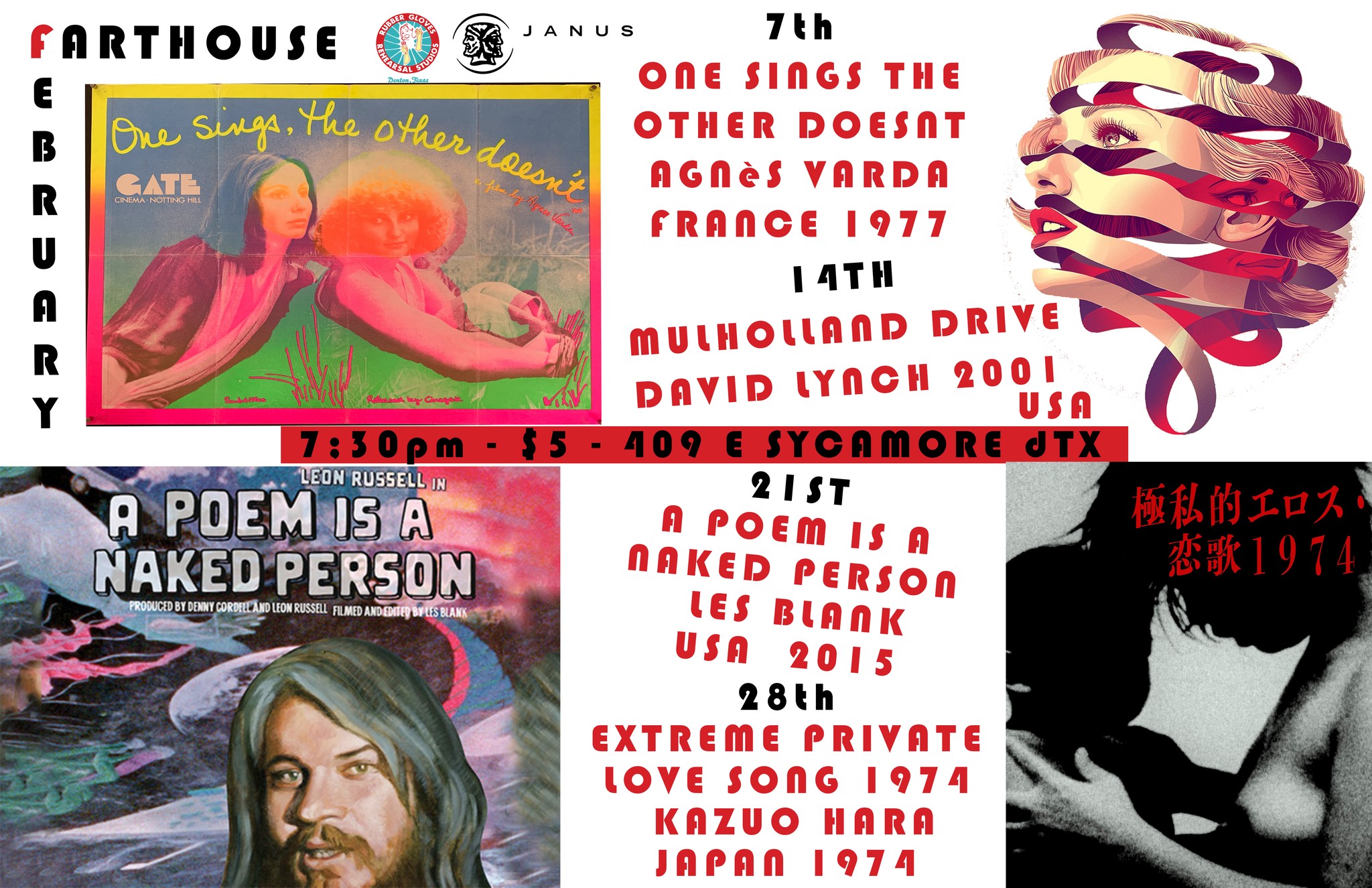 Spread the ❤️
We are back with a full lineup of movies for February.
7th – One Sings the Other Doesn’t – Agnès Varda – 1977 – France
Agnès Varda’s unsung feminist anthem is both a buoyant chronicle of a transformative friendship and an empowering vision of universal sisterhood. When seventeen-year-old Pauline (Valérie Mairesse) helps struggling mother of two Suzanne (Thérèse Liotard) procure the money for an abortion, a deep bond forms between the two, one that endures over the course of more than a decade as each searches for her place in the world—encountering the dawning of the women’s movement, dreamy boho musical numbers, and an Iranian adventure along the way. Initially divisive for its sunny, idealized view of female liberation, One Sings, the Other Doesn’t now seems all the more radical—and all the more vital—for its unabashedly utopian spirit.
14th – Mulholland Drive *4K PRINT* – David Lynch – 2001 – USA
(Valentine’s Day diner and a movie with So Good Vegan)
A love story in the city of dreams . . .
Blonde Betty Elms (Naomi Watts) has only just arrived in Hollywood to become a movie star when she meets an enigmatic brunette with amnesia (Laura Harring). Meanwhile, as the two set off to solve the second woman’s identity, filmmaker Adam Kesher (Justin Theroux) runs into ominous trouble while casting his latest project. David Lynch’s seductive and scary vision of Los Angeles’s dream factory is one of the true masterpieces of the new millennium, a tale of love, jealousy, and revenge like no other.
21st – A Poem Is a Naked Person – Les Blank – USA – 1974
Les Blank considered this free-form feature documentary about beloved singer-songwriter Leon Russell, filmed between 1972 and 1974, to be one of his greatest accomplishments. Yet it has not been released until now. Hired by Russell to film him at his recording studio in northeast Oklahoma, Blank ended up constructing a unique, intimate portrait of a musician and his environment. Made up of mesmerizing scenes of Russell and his band performing, both in concert and in the studio, as well as off-the-cuff moments behind the scenes, this singular film—which also features performances by Willie Nelson and George Jones—has attained legendary status over the years. It’s a work of rough beauty that serves as testament to Blank’s cinematic daring and Russell’s immense musical talents.
28th – Extreme Private Eros: Love Song 1974 – Kazuo Hara – Japan – 1974
When his wife, the outspoken feminist Miyuki Takeda, announced that she was leaving him in order to find herself, Kazuo Hara began this raw, intensely personal documentary as a way to both maintain a connection to the woman he still cared for and to make sense of their complex relationship. Granted at times shockingly intimate access to Miyuki’s personal life, Hara follows her wayward journey toward liberation as she explores her sexuality with both men and women, becomes pregnant and raises a family as a single mother, and grows increasingly disenchanted with the constraints of traditional social structures. A film as radical, complicated, and uncompromising as Miyuki herself, Extreme Private Eros explodes the boundaries between subject and filmmaker to create a stunningly candid portrait of a woman willing to risk everything in her quest to live on her own terms.
Doors at 7PM, Show at 7:30PM except Mulholland Drive 8PM – $5- Free Popcorn
Presented in collaboration with Janus Films