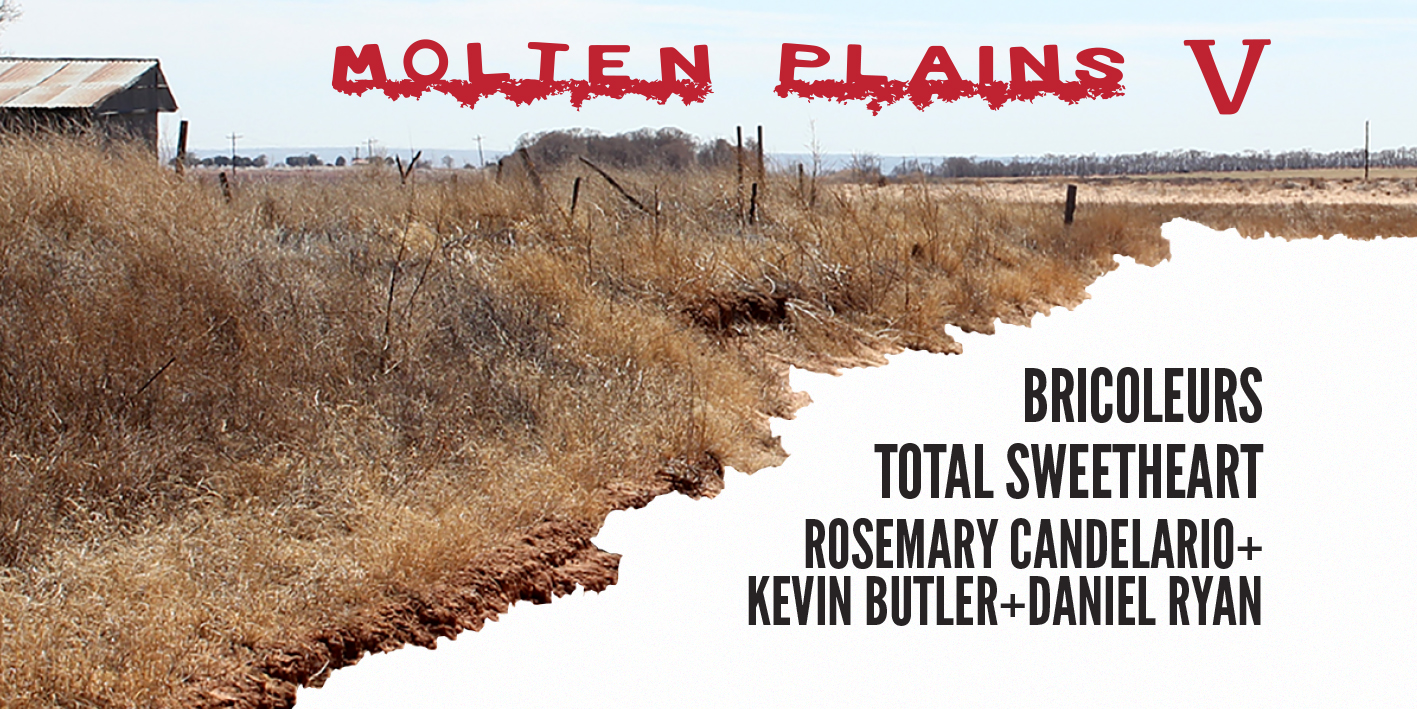 The fifth Molten Plains agglutinates a few distant soundforms.
Bricoleurs will bring some clarinet tenets and field recording tourism from Austin, butoh dancer Rosemary Candelario will perform as a trio with sousaphone master Kevin Butler and unpredictable sound explorer Daniel Ryan, Total Sweetheart will close the night with their medical equipment/eurorack assault.
doors 8pm
music 8:30 sharp
$5-20 generous sliding scale
Molten Plains is a monthly series of adventurous sounds and further music experiences.
BRICOLEURS (Austin)
Josh Ronsen and Vanessa Gelvin have a great deal more in common than being multi-instrumentalists, visual artists and zine makers. They create singular systems of playing and hearing music. Bricoleurs’ work explores the relationship between clarinet tenets and field recording tourism. With influences as diverse as Kazimir Malevich and Iancu Dumitrescu, new tensions arise from both traditional and modern dialogues. Ever since they were pre-adolescents they have been fascinated by the endless oscillation of mental longing and sensual power. What starts out as vision soon becomes finessed into a cacophony of vibrational spaces, leaving only a sense of dread and the chance of a new relation to self, truth and desire.
Ronsen has worked in Austin since 1994. He has recorded and performed in Katie & Rachel, Frequency Curtain, the Gates Ensemble, LSJ, the Austin New Music Co-op and brekekekexkoaxkoax. Work in performance art has led him to destroy a hundred Pierre Boulez records, blindfold audiences or place hand-mounted speakers (handphones) on their ears, host a “Flux Café” that served individual Fluxus performances on demand, and direct “Stacked Deck,” the 1959 experimental play by Dick Higgins.
Vanessa Gelvin is a sound artist and sculptor working in glass, stone, and porcelain. Her work primarily draws from her academic background in cultural anthropology, sociology, and media studies. She is a co-founder of Phonography Austin, an arts collective dedicated to acoustic ecology and the art of field recording, and performs on a number of instruments and approaches in Bricoleurs, Katie & Rachel and Disensemble.
https://bricoleurs.bandcamp.com/album/strands-of-wire
ROSEMARY CANDELARIO + KEVIN BUTLER + DANIEL RYAN
Rosemary is a scholar and artist specializing in butoh, which she has studied, taught, and performed across the United States and around the world. Her books and articles on butoh and butoh-related forms have been published in English and Japanese, and she was awarded the Oscar G. Brockett Book Prize for Dance Research in 2018.
Born and raised in Houston, Texas, multi-instrumentalist Kevin Butler is currently located in the Dallas area. Kevin has held tuba positions in the Eastern, Round Top, and Aspen Festival Orchestras. Currently plays with such wide-ranging groups as Jamil Byrom and the Grown Folks, The Free Loaders, Terence Bradford and Congo Square, The End of the World Parade, the Big Ass Brass Band, and is a founding member of the Dallas-based world-fusion quintet The Obscure Dignitaries.
Musician based in Denton, TX. Daniel loves harsh sounds, tiny sounds, free sounds, and sounds you can only see.
TOTAL SWEETHEART
From the LED strewn Dallas skyline, comes a focus on textural static manipulation and sonic extremity, an exercise in abject maximalist assault in the style of their predecessors that also looks to the future of the genre. TOTAL SWEETHEART is Nathan Golub (Ascites, Black Leather Jesus) and Ryan Jones (Struggle Session). Medical equipment, eurorack synthesizers, granular samplers, and classic American pedal abuse.
https://youtu.be/gumtR5h_C3w