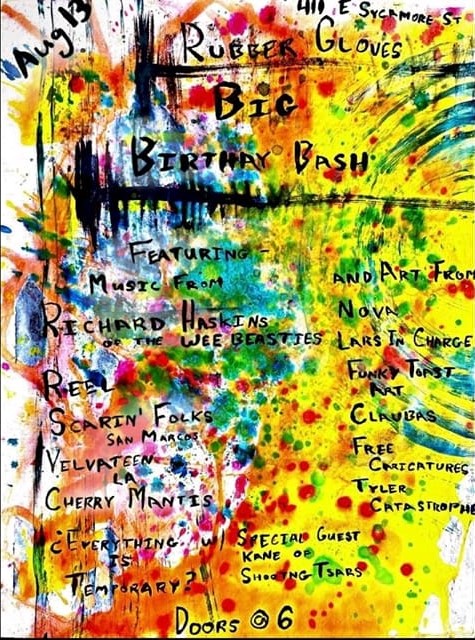 The big birthday bash for the old men @eyesoftheworld94 and @enakisking opens up with a solo set from one of Denton’s most infamous punk rockers @richardmotherfuckinghaskins who quite possibly may be one of the most wild people you’ll ever see hit the stage when he’s with his band, will totally serenade you to a different universe with his acoustic guitar and sweet melodies, followed by a new Denton local favorite @reelband who you absolutely have to check out, then we got a band that we’ve played a couple shows with already and always have a great time with, @scarinfolks from San marcos, Next is a touring band from LA called @velvateen_band who is an insane two piece with some bars from Mars baby, you don’t wanna miss this shit, after that we have a really funky band from Arlington called @cherry_mantis who melts our hearts to mush every time we see them, to be honest I don’t know how we’re going to follow all those incredible acts! Thank you to our bassist @pugachu for the sick flyer! We’re so excited to play with this show with all of you guys. It’s going to be the best birthday ever!